Question:   What can  you do when someone buys you a T-shirt
appliqued with trick-or-treating cats?

Answer:    Have your friend turn it into an autumn tote bag!

At least that’s what my cat-loving friend did.  Her daughter bought her this cute T-shirt because of the adorable applique, but my friend didn’t think she would get much wear out of this long sleeved shirt. So she decided to have me turn the applique into a panel for a tote bag.  We’ve done this before with cat appliques, but not with an entire scene from a shirt.

As soon as I thought about the project, I knew that I wanted to use a pattern that was simple.  I didn’t want any pockets or straps or zippers on the purse front that would disrupt the appliqued scene.  I chose this pattern: 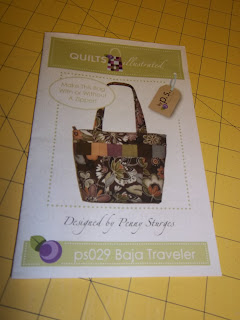 This pattern, Baja Traveler, designed by Penny Sturges doesn’t look like a simple design, but if one ignores the instructions to divide the front panel into three pieces, it is a simple design.

Normally, I put a pocket of some sort on the outside of a purse, but this time, I decided that clean and simple would be best. 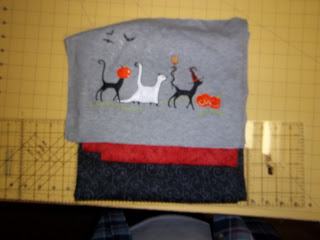 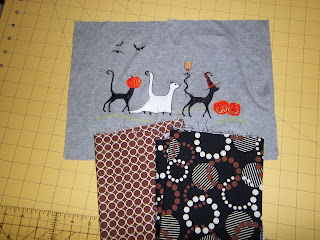 After I’d cut away the Tshirt from the scene, my next step was to decide which fabrics I would use for the body of the tote bag.  My friend didn’t want a bag that looked especially Halloween-y, so I tried to go with more of an autumn look.

The gray backround fabric, however, did not lend itself to being used with most of my fall prints.  You can see in the picture above on the left that I chose fabrics that would pick up the brown and black elements in the embroidered scene.  I also wanted to use a bit of orange, but not too much orange.

The “orange” that I chose in the picture above right, is actually more of a dark red or rust color.  I like it.  It picks up the pumpkin color without screaming “Halloween!” 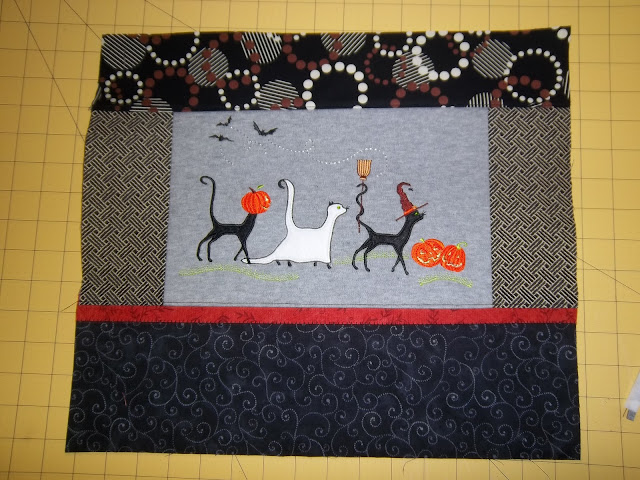 My next step was to “build” the front of the purse.  I ironed fusible interfacing to the backs of each piece of fabric before I sewed them together to give stability to the piece, especially important for the knit t-shirt fabric.

I used just a narrow strip of the rust/orange fabric directly under the picture.  To keep that little piece of fabric from flipping up, I used the decorative blanket stitch to secure it to the bag front.  This makes it look almost like ribbon. 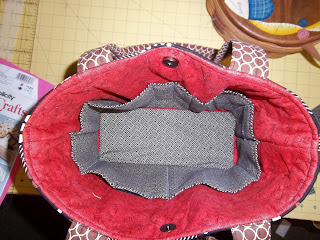 The next decision was zipper or snap closure, and I opted for a magnetic snap, mainly because I wanted people to be able to see some of the lining fabric.  I did make a velcro closure for one of the interior pockets so that my friend would have a safe place to carry money or important cards.

The lining fabric matches the orange/rust trim on the front of the bag, and the interior pockets are cut from the black basketweave fabric that flanks the appliqued scene. 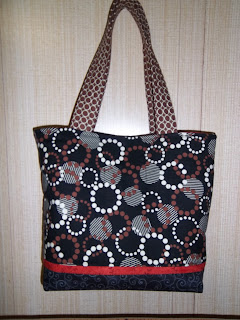 Here’s a shot of the back of the bag where I used the main fabric for the large portion of the bag back.  I used a coordinate to that fabric to make the handles.

The orange ribbon-like trim is repeated on the back of the bag, too.

Overall, I’m quite pleased with the final bag.  I hope my friend likes it since she hasn’t seen it yet.  I love combining fabrics, so I enjoyed the creative process involved in making this autumn tote.